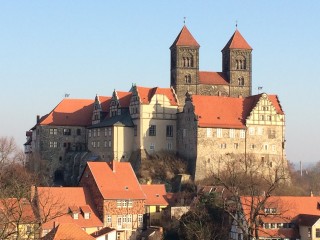 Making a historical documentary or: how I learned to stop worrying about footnotes

PIMIC fellow Sarah Greer discusses her experiences of making a historical documentary. This post first appeared on Beyond the Dark Ages,  as well, in the blog of the St. Andrews University’s School of History.

I’m very fortunate to be part of a research group on Power and Institutions in Medieval Islam and Christendom (or PIMIC for short). A number of other researchers like me are spread across universities and research institutes throughout Europe, working on various areas of medieval history and trying to understand why the Islamic and Western Christian worlds developed in the different ways that they did. As part of the training we’ve been offered, we’ve each been given the task of creating a short documentary on part of our research.

Getting to grips with making a documentary is equally exciting and nerve-wracking. Learning how to film and edit material, how to construct an interesting narrative and how to communicate my research publicly has been hard but rewarding work. It’s also helped me get over my fear of standing in front of a camera – when you have to replay a clip of yourself talking in close-up 20 times, you’re either going to run screaming from the room or learn how to be objective.

Surprisingly for me, the act of being on camera hasn’t been the most difficult part of making this film. Instead, what I’ve spent hours worrying about has been the thing which I thought would be the most straightforward – writing the script. After all, it’s founded on the research t

what I’ve been living and breathing while doing my PhD, and, in a way, I already write about it for a living. Surely talking about it in a 10 minute documentary wouldn’t be any harder than giving a 20 minute seminar paper at an academic conference?

But, when I came to write my script, I was stuck. This was a whole new genre which I’d not really thought about. For one thing, where on earth am I meant to put my footnotes? How can I stand up and present my research without talking about all the arguments, the debates and the discussions that are still going on about the subject? Should I simply be authoritative, a talking head who presents my opinions as facts? Since there are still large gaps in our knowledge of the topic that I want to present, the idea of doing that doesn’t sit so easily with me.
So, what to do? I’m still in the process of figuring it out, and probably it will be a steep learning curve as I keep working on the film. What I have decided on is to tell the story of one woman, Mathilda of Quedlinburg, who we know held a remarkable position in the political world of tenth-century Germany. But, as with the vast majority of medieval women, the amount we know about her is dwarfed by what we don’t know. We get glimpses of her life, moments when our sources let us briefly see what she was doing, before she again passes out of sight. The reason for those gaps, and what Mathilda was doing in the shadows when we can’t see her, are open to conjecture and interpretation.
And that, I think, is the key. We have facts about her life which we currently agree on (although those are up for discussion as well). Everything else has to be filled in. By telling Mathilda’s story, I can only ever tell my version of her story. If I’m honest about that in the documentary, then perhaps it will go some way to making up for my lost footnotes.