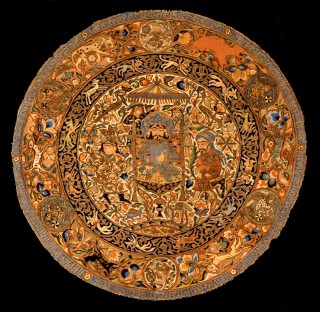 Depiction of Ruler with vizir and amir. Special thanks to “The David Collection, Copenhagen”. Inv. Nr. 30/1995. Photographer Pernille Klemp.

The term “Islamic state” has more than 39 million hits on Google. Since 9/11 it has been used uncritically by many media commentators as a catch-all term for the goal any political group that defines itself as Islamic, from the Muslim Brotherhood in Egypt to terror groups like ISIS in Iraq and Syria.

The obvious problem with the indiscriminate use of this term is it blurs the differences that exist between the many contemporary variants of political Islam, not least their propensity towards using violence to achieve their political goals.

The second and perhaps less obvious problem is that the current media discourse treats concepts such as “Islamic state” as a static concept traceable back to the 7th century, when in fact it has been highly mutable both in theory and practice.

Looking at the history of a concept like “an Islamic state” shows that it is as elusive as the Marxist term “revolution”. What is an Islamic state? When will it come? How should it be created? Has one ever existed? If so, when did it go wrong? Questions such as these have been preoccupying Islamic intellectuals since the 7th century AD. By reifying the term in the present debate, we are doing a huge disservice both to the people caught in the cross-fire and their collective historical experience.

In my PhD-thesis I wish to take this historical experience seriously by examining how Islam and politics were reconciled by rulers and ruled during the reign of one military dynasty; the Mamlukes. The Mamlukes ruled over Egypt and much of modern day Israel, Palestine, Jordan, Syria and Lebanon between the 13th and 16th centuries AD.

In particular, I am interested in how the Mamlukes tried to reconcile their need for tax revenue with religion, more specifically how the question of Islamic ethics of government featured in negotiations and struggles over the levying of taxes.

Now, you might ask why anyone would want to focus his or her research on something as dry and bureaucratic as taxes instead of a more colourful aspect of medieval Islamic society. In reality, the collection of taxes is one of the most basic situations of contact between subject and ruler, found varied in all complex societies. Examining how subjects reacted to taxation and how rulers justified and carried out the levying of taxes can therefore tell us a lot about how people viewed the regime they were living under and how this regime, in turn, sought to justify its rule. In the particular case of Islamic state building, the issue of taxation becomes even more interesting since there is a clash between political expediency and Islamic law.

The Quran, the example of the Prophet and later Islamic legal texts place theoretical limitations on the ruler’s ability to decide his own tax policy, and thus taxes offer a fascinating area for investigating the relationship between Islamic ethics and political interests. To be sure, my thesis will not help shapeing the blueprint for an Islamic state. But by focusing on one example of Islamic state building in practice it can shed light on lived Islamic history in a certain place at a certain time. Combined with similar studies of other times and places, this thesis might help to shed some light on what lies behind a term which desperately needs to be contextualized. Perhaps now more than ever.