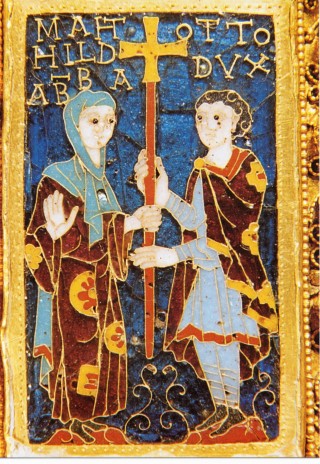 My research explores the political roles played by convents of religious women in the tenth century. Female monasteries held a position of prestige in the newly-formed German Empire, and certain convents such as Gandersheim and Quedlinburg served as powerful political centres. In contrast, other regions of Western Europe saw an apparent decline in the social and political importance of female monasteries. The memorial role of Saxon convents has been seen as a reason for this different path of development in Germany. As female members of the imperial Ottonian family were appointed as abbesses of certain monasteries, the idea formed that these Ottonian royal convents were centres of familial memoria, that is, places where the history of the imperial family was preserved and passed on.

In order to examine this theory explaining why Saxon female monastic institutions developed in a different way from other regions, I look at how convents closely linked to the Ottonian family developed throughout the tenth and early eleventh centuries. In particular, by exploring how these convents could use and create new memories of the past, we can see how they attempted to construct their own institutional identities. Through tracking the developments of these memories over time, we can also see how convents responded to changes and new political circumstances, and explore the process of institutionalisation of identity.

By focusing on the Ottonian situation in detail, my research also allows a comparison with the different patterns of female monastic development in Anglo-Saxon England and West Francia. These different regions had close contact with the German Empire throughout the tenth century, and had experienced a similar history of female monasticism up until the end of the eighth century. Through a detailed investigation of what went on in Ottonian convents, we can try to understand what led communities of religious women to become so politically active in tenth-century Saxony compared to their sisters in neighbouring regions.

For more on my research see my Academia page (https://st-andrews.academia.edu/SarahGreer) and my departmental webpage (http://www.st-ndrews.ac.uk/history/postgrad/postgraduates/sarahgreer.html)