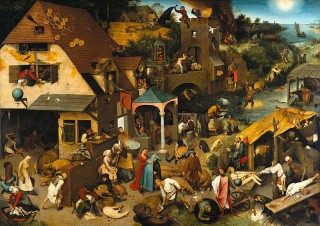 I hold the position of ESR-1 at the CCHS-CSIC in Madrid, and I am also a PhD-student at the University of Paris-1 Panthéon-Sorbonne, where I’m completing my thesis under the direction of Ana Rodriguez and Joseph Morsel. Within PIMIC I’m currently working on two projects. The first project is entitled “Vocabularies of Power in Medieval Norway, Castile and Aragon in the 13th century.” The second project is dedicated to reconstructing the principles of building “hierarchies among equals” in medieval Europe.

The main subject of the first project is changes in the lexical fields of words designating the relations of domination in 13th-century Christendom. The basic assumption is that these relations were constructed on different bases than nowadays, so I try to avoid looking at the medieval phenomena through the prism of modern concepts of power, but take medieval concepts as the starting point of my research. To reconstruct the meanings of medieval words that translated these concepts, such as potestas, auctoritas, dominium, regnum, imperium, potentia, iurisdictio; vald, máttr, ríki; poder, señorio, poderio, jurisdicción etc., I study the co-occurrences of these words in different contexts. A set of computational tools is available now to accomplish this work: TXM, Lexico 3, CooCS, SCP. As medieval elites had at their disposal at least two languages with which to construct power relations among themselves and their ‘subjects’, I work with both Latin and vernacular sources. I aim to explain why and under what circumstances the differences among the vernacular and Latin vocabularies of power in each territory turned out to be significant in this time period, but also I try to reconstruct the ‘core’ of the meanings – at least for Latin words – that was common to all territories of medieval Christendom. (Latin power words didn’t have the same sets of meanings everywhere in the region).

My second project within PIMIC is dedicated to the hierarchies among equals (“equals” not in Jacques Le Goff’s sense, but rather the “holders” of the same positions/offices: cardinals; bishops; dukes; barons etc.). Today we often construct these hierarchies listing people in alphabetical order and do not pay much attention to the consequences of being 5th or 10th on the list. However, different principles of constructing such hierarchies may be observed in Medieval Europe and they vary significantly in different territories: while the secular and ecclesiastical elites of some territories adopted the principle of seniority (as prescribed, for instance, by Decretum Gratiani); the elites of other territories constructed this type of hierarchy according to the importance of the place where they hold their position. Moreover, sometimes office-holders seem to be listed in a random order; nevertheless, this ‘random’ order often reflected the importance of the person described in that particular document. The number of struggles over placement in this type of hierarchy all over Europe, as described by medieval authors, proves its importance for the representatives of medieval elites. My goal is to study how the adoption of this principle of building this type of hierarchy influenced the general structure of relations within elite circles in different European territories; how did individuals use their positions within this hierarchy to receive more weight in decision-making processes, or at least receive more privileges? What was the logic behind elites of different societies adopting one or another principle of constructing the hierarchy, and were there different logics between ecclesiastical and secular elites?